50 years have passed since the creation of the hamburger that revolutionized the fast food service industry at an international level and that has become a social, cultural and economic icon. The brand launches collectively 5 coin designs (MacCoins) collectibles. 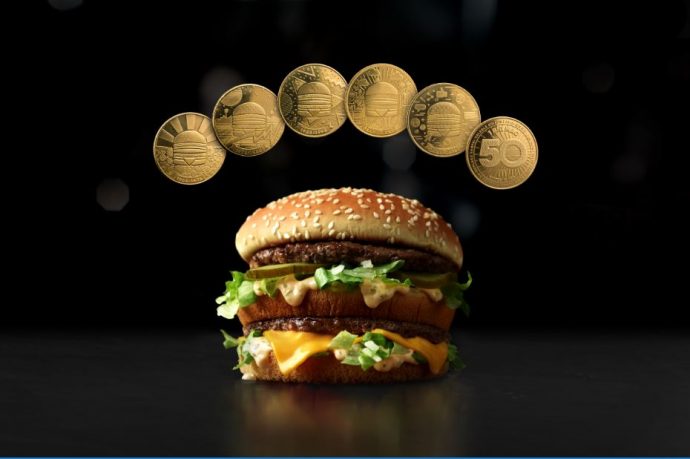 The Big Mac, icon of McDonald’s, celebrates the 50th anniversary since its inception. The emblematic hamburger is unique, since half a century later it continues to dominate the menu of the chain of fast food restaurants anywhere in the world, attracting consumers with the same flavor. Its relevance is such that McDonald’s delivers approximately 91 million Big Macs per year in Latin America and around 17 million per year in Argentina alone. It is the best-selling product in the history of McDonald’s and an icon of popular culture that changed the way people consume food around the world.

The Big Mac burger marked a turning point in the concept of fast service restaurants. From its creation, the industry understood that it could offer different burgers and it became the reference of the combinations that followed it. In addition, even outside the restaurant, the hamburger achieved worldwide recognition: The Economist magazine used its price to create the Big Mac index, an economic tool that compares the purchasing power of the different countries where it is sold. Only an element that is deeply rooted in the collective imagination of each society can become a global economic reference.

In turn, its connection with the financial market was the inspiration for the action that will be the protagonist of the 50th anniversary. McDonald’s will launch the MacCoin, a limited-edition global coin that fans around the world can purchase, collect and trade for a free Big Mac starting in August. More than 6.2 million MacCoins will be distributed in more than 50 countries, including Argentina. These commemorative coins will present five unique designs, each of which represents a decade of the Big Mac. In addition, the seven languages ​​that appear in the different models symbolize the variety of participating countries: Arabic, English, Indonesian, Mandarin Chinese, Portuguese, French and Spanish.

The Big Mac is also the protagonist of one of the biggest solidarity movements in the country. Each year is a key part of the annual collection in which the entire community can collaborate buying your hamburger to help. In 2017 alone, about 280,000 Big Mac burgers were sold in a single day at the Happy McDia to help the families and children of the Ronald House.

The Big Mac is composed of a special and secret sauce, lettuce, cheese, cucumber, onion and bread with sesame seeds, in addition to its classic extra slice of bread between both medallions of meat. The origin of the third slice of bread in the middle was an innovative invention for the time that occurred to Jim Delligatti, its creator, who included that piece of bread because it makes all the ingredients stay together since putting two medallions of beef the hamburger became more slippery.

“The Big Mac provides delicious and accessible moments to people from all over the world, so we wanted a global celebration as unique as the hamburger itself.” The MacCoins, which will be available from August in our country, transcend the coins to represent our iconic hamburger and, at the same time, offer customers the opportunity to share an experience with us, “said Gabriel Serber, General Director of Arcos Dorados in Argentina.” “We invite everyone to be part of this anniversary in our country you will enjoy special activities to surprise customers and fans, “he added in the announcement.

In 1967 Jim Delligatti, owner of McDonald’s in Pittsburgh, invented La Big Mac and a year later (1968) was included in the menu of all the stores nationwide, and later in 1971, he debuted abroad by including it in the menu in Holland, Germany, Guam, Japan and Australia. In August 2007, he opened the Big Mac Museum and has the largest Big Mac statue in the world. Hamburger fans can visit him in North Huntingdon, Pennsylvania, to learn more about Jim Delligatti, the inventor of the Big Mac and about the history of the global icon, among other things.
In 1998, it was found that in Irwindale, California they ate 337 of these hamburgers per capita per year, which led to the city being declared the “Capital of the Big Mac”.